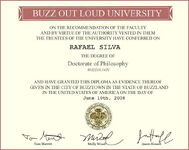 Rafa is a student of Network Technologies born in Brazil and never traveled across the borders of his country. His goal next year is finally take a trip to the U.S to go to CES 2009 2010 and watch at least one BOL live show.

He really likes meeting people from the internet on the real world and that's why he tries to go to every BlogCamp or any tech-related event that happens on cities near him. He still have both kidneys.

When CES 2007 was happening, two brazilian podcasters flew there and meet up with Tom and Molly (see the photo). After they came back, they commented on the show about who these two people were and the podcast that they produce on C|Net. Then, googling for Buzz Out Loud, he found the show and subscribed to it after he listened for the first time, on alpha.cnet.com.

The very first email he sent (sorta "Well, acctually" email) to them was read on the air in the exact same date of his birthday, by the fabulous Veronica Belmont, which makes he love this amazing podcast even more. It was the Episode 484, at 27 min 34s.

The first time his voice made it into the show was on Episode 695, at 18 mins 59s, with a 'Well, actually' correcting Molly Wood.