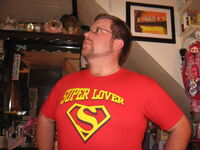 Live with my wife and two children (daughter 10 and son 7) in Highland, IN (Chicago area). Worked for RadioShack from 09/99 thru 03/06; BestBuy from 3/06 thru 2/07; Local PC Repair from 2/07 thru 10/07; Verizon Wireless from 10/07 to present. CrackBerry Addict using a Pearl 8130. At Verizon I am a District Data Champ teaching Workshops on all PDA/Smartphones including BlackBerry (addict since 2008), Windows Mobile (user since 2000), and Palm (unfortunate user since 2008, bad times)where we answer user questions and show them cool features such as Vlingo (voice command email, texting, etc) Orb (remote streaming of your content on your mobile device) and more.

Citizenship=Member of the CrackBerry Nation, Serving in the TWiT Army, residing in Buzz Town

Been listening since December of 2005. Called in and written emails on Cell phone related issues from time to time. Calls have made it on air a few times.