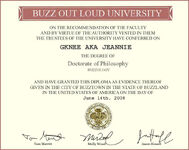 gknee is still trying to figure out what she wants to do when she grows up. Or maybe she's already doing it.

A performer turned tech fan, she co-owns a small home business in the educational entertainment field. Mostly office work: web site, database, booking, scheduling, contracts, advertising, promotion. If only clients would stop calling during recordings of BOL. Some people have no concept of what's really important.

gknee is a silly spelling of Jeannie.

gknee loves being online, listening to podcasts (Gadgettes!), chatting, Twittering, being at live recordings of the show and generally hanging out at #CNETFans.

Her eye sight is terrible and she can see screens better than anywhere else. That's why she spends so much time online. Sure....

Involvement with Buzz Out Loud

gknee started listening to BOL in 2007 when she discovered podcasts. In fact it was BOL that led her to discover podcasts. She thought it was great until the advent of WatchBOL (~ February 2008) when it got even better. Thanks pb30 for all your hard work.

gknee was drawn into the community of the IRC channel #CNETfans. When the original Channel Operator (OP or moderator) went offline for an extended period, she kind of stepped into the void and became an OP, then Adminstrator then successor/owner.

gknee has achieved her Doctorate in Buzzology. The ridiculous nature of this honor is simply irresistible. Many thanks to the perpetrators.

[Note: gknee originally got her doctorate in April 2008 but did it over with this user name]

Please note: I am NOT the "Gknee" on Twitter. My Twitter is http://www.twitter.com/gkneeisme I am also not formspring.me/gknee. grrr.