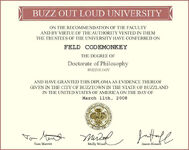 By day, Feld the Codemonkey a mild-mannered CTO of medium-sized software company. By night, Codemonkey like fritos.

Feld contributes to a variety of forums, webzines, and blogs under assumed names. Boring manager Rob not allow Codemonkey use real name on Internet.

He doesn't call, he doesn't write, but Feld listens and loves the show. Someday Codemonkey call in with voice like Stephen Hawking.

Long-time listener, first interacted with buzztown during the bol.pb30.com chat era March 2008, when he also had more spare time to edit the wiki. Has been watching and chatting live ever since, with a few dry forum posts to the lounge.

Suggested several of the show titles, but not keeping track. Usually just clever quotes from hosts or obvious wordplay anyone could generate.

Graduated from BOLU March 11, 2008, with a Ph.D. in Buzzology after 8 long Web-minutes of hard work. Learned the important life lesson that if at first you don't succeed honestly (7/10), try again with Google (9/10). Also, practice (with the back button in Safari) makes perfect (10/10). Codemonkey scared maybe he remember too much meaningless detail, not enough important stuff. But, Dr. Codemonkey, Ph.D., think now he demand raise.

If you need help with the chat or wiki, please ask. The admins, operators and half-ops love to help when we can. I'm not in the chat room as often as the full-ops, but if I can help I will.

My pet project is to encourage buzztown chatters, loungers, plurkers, twitterers, e-mailers, and voice-mailers to add a short description of their monikers to the Nicknames wiki page, even if they would rather not sign up for an account with a full profile. A quick-reference helps newcomers feel at home with the regulars and hosts.

About 9:17 into the Ustream, tried to help Tom explain the Natural Law Party's philosophy:

Feld: "Natural Law is the spiritual worship of science."
Tom: "That sounds right, actually, Feld. You got that one."
Molly: "You notice that? Either Feld is really fast with Google or knows a lot."
Feld is just old.

Knows a lot? Codemonkey a know-it-all! How's that for narcissism? Didn't need Google, just watched prior elections. Explanation of NLP was over-simplified, but brevity does that.

The following episode focused on narcissistic profile pages, so to puff up narcissism cred, Feld is compelled to wikify the acknowledgment of his enormous wit, rivaled only by his enormous ego and dashing charm. Then codemonkey remind himself he not even human, and crawl back into cage until next BOL, or opportunity to plurk about himself in third person.

First Molly response: Hosts had to leave, so chatters were buzzing for an all-day chat session.

Huh? It's an inside-radio history joke: NBC Radio had a short hourly show called News on the Hour which later became a format. CBS Radio one-upped with Up to the Minute News every quarter hour or half hour depending on time slot. Others followed suit. Tech news "on-the-minute" combines both titles into something ludicrous; but not unlike TechTV.

Where are they now? CBS moved Up to the Minute to the TV graveyard shift in 1982. A BBC TV news parody was later named On the Hour. TechTV's demise led directly to the rise of podcasting, thanks to Revision 3, BOL host Tom, guest host Leo Laporte of TWiT, and many others.

That's Codemonkey's revision of history, and he's sticking to it.

First Tom response: Other chatters were buzzing up a summer camp-out, but the hosts were a bit hesitant.