Yo' momma is so fat. How fat is she? She's so fat she has two Wiis, one for each...OK, never mind. In other news, Microsoft walked out on Yahoo. Is it for good this time? What does it mean for you? (As usual, a big fat nothing, unless you're a Yahoo stockholder.) Also, on the deathwatch today: E3, Cuba's ban on home computers, and Google audio CAPTCHA.

Cuba lifts ban on home computers (yes, they had that) [7]

Concerning the Windows Feedback panel program and Windows Vista Ultimate, I wish everyone who is a Vista hater would just take a chill pill. I was beta tester for Vista and will be using my free copy of Vista Ultimate to build a HTPC for my children. Yes even children are cable of using and understanding Vista. Vista is a wonderful Operating system, PERIOD!!!!

--Mark Brewer Dayton, Ore. Down the road from the Spruce Goose

P.P.S.: Must remember to take my medication.

Actually, there are several better (and much cheaper) ways to destroy a hard disk:

Well, actually, with the price of gas, it might be cheaper to buy the $11,000 disk crusher.

Love the show, --Fletcher from Minnesota.

“I Voted” in the Buzztown elections[]

So I’ve been trying to get myself excited by the prospects of the upcoming mayoral election. Truth-be-told I think I prefer the current, social collective groove we have going on now but when the times change we must either adapt or die. So how to get fired up? Well we need a reward! One of my favorite parts of election day is the bestowing of the “I VOTED” sticker so I took the liberty of designing what I hope will become the official Buzztown “I VOTED” sticker.

I know you don’t like to accept attachments via e-mail, so I poked around the wiki to see if I could post it there but I guess I’m a bit dense and didn’t see a way to do it. The sticker is attached but I’d be happy to post it somewhere if you’d rather. In addition to the jpg file of the individual sticker, I’ve attached a template suitable for printing on Avery brand Round Inkjet Labels, model 8293.

Keep up the good work y’all

Indiana Jones and the Tickets to the Baseball Game[]

This strikes me as the kind of story you would possibly, maybe talk about if it was a slow day on Monday. In any event, it’s interesting and has to do with the new Indy movie. They’ve got this weird little ad on the schedules for May showing a picture of Indiana Jones on May 22. Here is the link to the Mets page:

Now originally, I was looking at the (go) Nationals(!) schedule, and they have the same pic-but no game being played. The Mets do. I figure that’s gotta stink, to be forced into advertising for something that is happening the same time as they game you are trying to sell.

Also, as of the writing of this email, you can’t click on Indy or anything-and it doesn’t say that it’s for the Indiana Jones movie-so you’d have to know that what was going on. Also, you’d have to go hunt down tickets on your own. Kind of a weird ad, I think, and a bit atypical for Net advertising which is why I thought, even if it isn’t Buzzworthy, it’d be interesting to pass along.

That and the New Indiana Jones movie is going to be awesome!…right?

In reference to podcast 716 last Friday, you referred to the U.K. study about the filthiness of our keyboards. As a microbiologist, I agree that chucks of lunch and dust bunnies aren’t probably doing anything for the cleanliness of your keyboard and may attract bacteria, but most of the harmful bacteria are coming from….gasp….us touching the keyboards with our filthy fingers. Most often, bacteria get on our digits by picking of our nose, sneezing on our hands, and the dreaded fecal-oral transmission, aka not washing our hands after using the facilities. Bacteria are on and in almost every nook and cranny of our bodies, so it comes down to quality, not quantity of what the bacteria that is on that keyboard. I am always appalled by those local tv news studies that say there is bacteria on our toilet seats, cell phones, keyboards, etc. No crap (excuse my pun). The little guys are everywhere. My recommendation: keep your fingering out of your nose, use a Kleenex when you sneeze, wash your hands after using the restroom, and don’t let anyone use your keyboard that you refer to as “Dirty Larry,” the guy around the office who you never see wash his hands when he is in the can.

For Pete's sake Molly, how many languages do you know???

Make sure you vote for your favorite Buzz Town mayoral candidate. When you do, you can proudly display your "I Voted" sticker.... 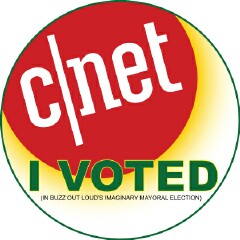